Information And Calculation Of Google AdSense-Must Read All Bloggers 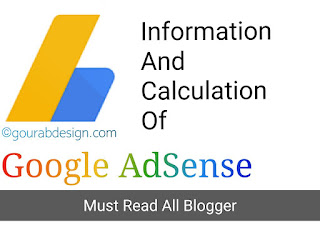 There will be a lot of questions in the minds of many people about Google Adsense. You do not even have complete information about this. So I thought I could tell the whole truth about it. As far as I know, I'll disassemble everything here.

What's so special about Google Adsense is that many successful people make hundreds to thousands of dollars a month. How come? What are the payment details? Well I will explain one by one in a simple language and hopefully can be understood.

What is meant by publisher is the person who has the right to display ads, after obtaining approval from Google about the criteria and conditions to be a publisher both from Google partners (such as youtube and blogspot) or on websites or blogs outside of partners (. com .in etc)

To find out the difference between adsense accounts, you can first read the article below. 👇


Now how are you paid by Google Adsense? It has its own calculation in setting fees for ad publishers. This network offers several different choices for ad variations that might appear on the delivery page.


The types of ads in Google Adsense include:

Here I will explain things or the most important part in calculating it, at least we can know a little google adsense business .


Abbreviation of (Cost Per Click). The term CPC is used to calculate the cost per click. Cost per click is determined by the advertiser, CPC for each advertiser varies, some are willing to pay more than other advertisers, depending on what advertised.


We don't know how much the CPC value is, only Google and the advertiser in question know that the CPC value for each ad unit differs from one another depending on certain keywords..


Cost per Mille. In Indian terms, it is commonly referred to as BPS (Cost per Thousand), so CPM and BPS means the same, ie adsense publishers will receive payments based on calculations per thousand times the page appears.


Revenue Per Thoushand Impression. The average income that can be obtained from every 1,000 impressions. For most Publishers, RPMs get between $ 1 - $ 5, depending on region, type of content, and ad relevance. The RPM is divided into 3 things, such as the one below.

Blogger Vs Wordpress - Which Platform Is Better And Why?


Query income per thousand impressions (RPM) is calculated by dividing the estimated earnings by the number of queries reported, then multiplying by 1000.


Page revenue per thousand impressions (RPM) is calculated by dividing income estimated by the number of ad requests made, then multiplying by 1,000.


3. RPM Ad Request - how much does google adsense pay per pageview

Ad demand revenue per thousand impressions (RPM) is calculated by dividing income estimated by the number of ad requests made, then multiplying by 1,000


Based on official sources


There are still many other terms in calculating that determine the amount of payment to the Publisher, if you want to learn more, you can open the source link.


What if the adsense ad is not clicked, is it still being paid?

So from a variety of questions, what if our ads only show without clicking, are they paid too? Yes ... we will still be paid based on what is explained above. indeed the biggest is if there are those who directly click on the advertisements that are aired, but other calculations as determined by the google adsense, must still be considered.


So the more visitors who come to our blog, the more potential dollars that will be generated, this applies also to Youtube, the more people see the video aired, the greater the expectation that the dollar will be earned, even if the audience does not click on the ad which is recommended.


Disbursement of funds from after our income has accumulated 100 dollars, the way it was taken is fairly easy, the Google Adsense system provides several payment systems, either by check or by bank transfer (wire) to use Western Union facilities.

Hope you liked this post. So, share it in social media. So that everyone can benefit.
If there are any questions in the heart, then ask for a comment. I would be very happy to give a reply.